I have officially replaced my Power Auras with Weak Auras.

Weak Auras has similar functionality that Power Auras has, with the exception that it is easier to use, has greater functionality, and most importantly: has been updated fully for Mists of Pandaria.

There are two sets of auras I am sharing, one is my CD Tracking aura. This aura will DYNAMICALLY change based on spec (Shadow, Holy, or Discipline) as well as what spells you’ve spec’d into. This aura group will give you a cooldown/cooldown remaining for our pertinent spells. (They are easy to update, add or subtract auras from in Weak Auras).  Click here for the import of that aura.

If you wish to have these auras sorted by off CD on the left, and on CD on the right, that can be done in the Group->Sort menu. 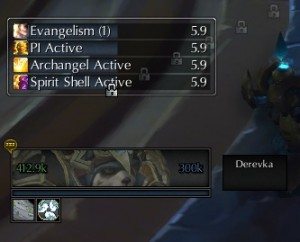 This is my aura for Rapture

Bet on League of Legends and other e-Sports contests at William Hill! Learn more about William Hill at https://williamhillpromocode.co.uk/