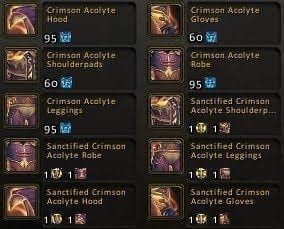 I alluded to some of this in my 3.3 Initial Impressions post, but I wanted to expand upon it a bit. Before I do that, we probably should recap how Tier items have evolved in Wrath.

In Naxxramas and Ulduar we had Slot Specific Tokens. For example, Gauntlets of the Lost Conqueror would yield Tier Gloves for Pally/Priest/Lock. Then came Trial of the Crusader, where we had a whole new system: Universal Tier Tokens – Trophy of the Crusade.(Almost reminiscent of original Naxx40′s system) With TOC, you didn’t NEED a Trophy to get your Tier gear. You could buy an an iLvl 232 Tier item for a given amount of badges, you could turn in badges and a Trophy of the Crusade for iLvl 245, or alternatively you could turn in a “Grand Regalia” token.

As you upgraded your Tier 9 gear from 232 to 245 to 258, the badges you used were somewhat ‘lost’ on the way — you didn’t need the prior version to upgrade; you could go straight to T9 iLvl 258. However, TOC’s system could wreak havoc on DKP Economies with Universal Tokens often favoring certain classes that had minimal gear competition on non Tier items. (Plate Spellpower gear, for one example)

Now, enter Icecrown and its Tier 10 system. To get a Tier item you first must purchase the base item with Emblems of Frost. This gives you the iLvl 251 version of the item. Then, you upgrade that item by turning the item in along with Grouped Token (Pally/Priest/Lock) to upgrade to the iLvl 264, and again to iLvl 277.

This system impacts many aspects of the game: it requires you to first purchase the iLvl 251 version (thus burning Emblems of Frost) and slowly work your way up. In TOC I skipped iLvl 232 and started at 245 since my guild did well in TOGC 25 and 10; Trophies became available quickly. People spent their first cache of Badges on non-Tier items, picking up Rings and Trinkets. In Icecrown, I think you’ll see people waiting to get Cloaks and Trinkets (unless they are in desperate need for that upgrade), and holding out for T10 shoulders first. (60 Emblems of Frost).

Of course, this new upgrading system plays an interesting role on the DKP economics of the Token drops. In your first few weeks, you’ll probably see Token drops going fairly cheap since people will only be able to upgrade once they have amassed enough Emblems first, then you’ll see the prices go back up as more and more raiders have enough Emblems to purchase and upgrade. The demand for the upgrade (people with the ability to upgrade since they already have their 251 item) increases; but the supply stays fairly static. (Only Saurfang drops them— that is until the next wing opens)

As I mentioned earlier, initially I didn’t like this new Tier System– but now, I think that it’s quite brilliant. It balances Casual Players and Hardcore Raiders well. One of the biggest complaints casuals voiced was that they had very little access to Tier gear. Casual players didn’t get to walk around and utilize the Set Bonuses that Tier Gear offered. To respond to that problem, Blizzard enabled Tier items to be attained solely with badges with the launch of TOC. While only the hardcore raiders were able to attain the highest iLvl version of these Tier Sets, they didn’t provide any visual distinction – there was no immediate visual recognition that their higher iLvl item was more difficult to attain. As catty as that may seem, many Hardcores struggled without that distinction. With T10, each increasing iLvl has the same look, but a different color scheme. For example, the Priest Crimson Acolyte set starts Green, then upgrades to Purple, and finally upgrades and caps at White. This methodology not only does this help distinguish raiders who get access to the ‘upgraded’ versions, but also allows the less hardcore players access to T10 and the set bonuses provided.

I really look forward to seeing this new system in action. Granted, I still don’t like the popped collar priests have to wear. Stay tuned! Maybe you’ll see Ava and I cameo on an episode of the Jersey Shore on MTV! What do you think about the new Tier System? Annoyed by the badge requirements? Like the fact that you get ‘use’ out of your old gear to upgrade?