by WOW Priest | Mists of Pandaria, PTR and Beta

Well now that we’ve seen the visuals of the new Level 90 abilities, (click here) lets take a look at the numbers behind the scenes! First, we need to realize that these numbers are complicated to theorycraft… mostly because there are variables that are difficult to quantify— specifically the positional requirements for all three. First, lets highlight these complications spell-by-spell.

Cascade – (10% Mana Cost, 25 Sec CD) Grows in strength the further it travels. So if you have your raid in a tight group of players ( a la Ultraxion) the growth of this spell is limited, despite the spell “preferring targets further away”.  Also, this spell has a finite target cap: 15, and it will not hit the same target multiple times. This makes the spell more expensive in the HPM (Healing Per Mana) world of 10 mans, as the spell will only hit 10 players and 5 charges/bounces are left unused.

Halo – (15% Mana Cost, 40 Sec CD) This spell also has a tricky range issue and ‘grows in strength’ component. This one reaches maximum strength at 25 yards. For example, at the epicenter (the casting priest) the spell is roughly one tenth the strength of the maximum strength at 25 yards. (and yes, it literally gets stronger every step you move away… its that sensitive) So this means that on fights where your raid is grouped up (again using Ultraxion as an example) you are disadvantaged to using this spell as you are giving up a good deal of healing being close to the epicenter. Halo also does not have a maximum number of targets.

Divine Star – (5% Mana Cost, 15 Sec CD) This spell is easiest compared to Light of Dawn. It moves in a straight line in front of you and then comes back to you in whatever position you are in. (ie. So if you are moving it will move  back to you covering an angle) heaing everything within 6 yards of the star… so think of it like a 12 yard wide bar moving out in front of you, and then back. If it passes a target twice (out and back) it will hit them twice. This spell does heal for the lowest amount, and the amount per hit is FIXED (in the tooltip). This spell also does not have a maximum number of targets.

So taking the positioning into account, and the growing power, you need to make some assumptions. The way I decided to compare these to each other was creating an average hit, with both spell hit minimums and maximums– this should, in effect, neutralize the range and “strength grows with distance” variable. For Divine Star, since the speed of the spell is pretty damn quick, and in PVE you usually try to minimize the amount of movement you do, I assumed that if you were hit by the Star you likely got hit by the rebound.

Note that the Average Heal for Divine Star, due to the speed of the spell, assumes being hit by both the outgoing and rebounding star. All numbers were done using the Beta Client, assuming non-critical heals, and a total of 10,400 spellpower.

Now that we have tried to neutralize the growing power/range of the three spells, we can now  layer in total number of targets hit and begin to evaluate the value of the healing done in from a HPM perspective. 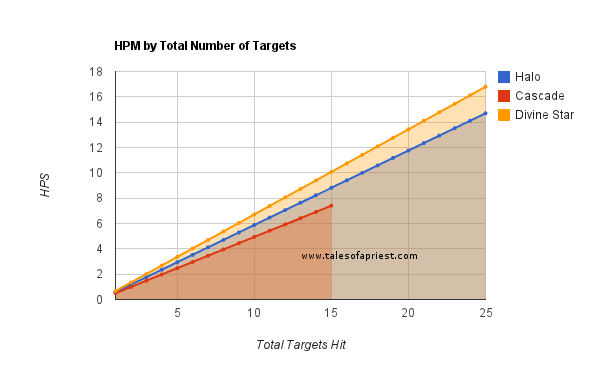 As you can see, Divine Star’s HPM increases notably as you hit more targets and of course Cascade drops off after 15. That is… IF you can hit the appropriate number of Targets to get those HPM numbers. This does require some positional favor over the other spells which have either a ‘smart’ bounce, or a 30 yard radius. This will dramatically change dependant on the fight mechanics. If you are grouped up and you can position yourself behind the raid, so you can hit a goodnumber of the raid with your Star… Yes, Divine Star will become the best HPM choice in this situation. If not, you may want to evaluate the other two choices based on the range and distance you will have on those raiders. (Note: If you reduce the amount Divine Star heals by 25% (only hitting 50% of all targets twice, it still comes ahead when hitting the same number of targets, but still scales greater than Halo the more targets you hit. Click here for the modified chart.)

Now, lets take a look at total healing done over a span of time since each of the spells have very different cooldown durations.  Lets take a look at how much healing is done over a 4 minute fight. (4 minutes is the shortest amount of time that all 3 spells can get an even number of spellcasts off).  So 6 Halos, 12 Cascades, and 16 Divine Stars– with all hitting the same total number of targets each time, and being used on CD…  (and we all know, that isnt likely to happen each and every time). 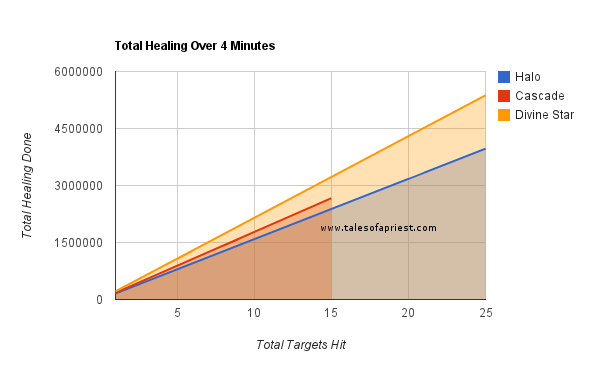 When using that chart to evaluate, remember that when looking at Cascade you should  reliably assume you will hit all 15 targets in a 25 man, and in 10′s you likely will hit all 10 targets…

I expect everyone to take this data with a heavy dose of salt… since these numbers are built off of ONE BETA BUILD, and will likely change. Not to mention, that there are some pretty substantial assumptions made on range, targets hit, and average heals per hit. Ultimately, it will depend on the raid encounter, the layout of your strategy and the damage patterns that will go out. That said, my visceral opinion on the matter is that (despite its comparatively lackluster animation), due to its efficiency and predictability in the amount it heals for, Divine Star could wind up being the winner in the long run. (Note: Divine Star has the same mana cost as Prayer of Healing, and heals for only slightly less; depending on the number of reliable targets it may be a superior choice over POH when off cooldown)

TLDR: it will be fight specific, however the potency and efficiency of Divine Star is something to greatly consider based on the number of reliable targets you can hit.