Is Rapture a Sign of the End of the World 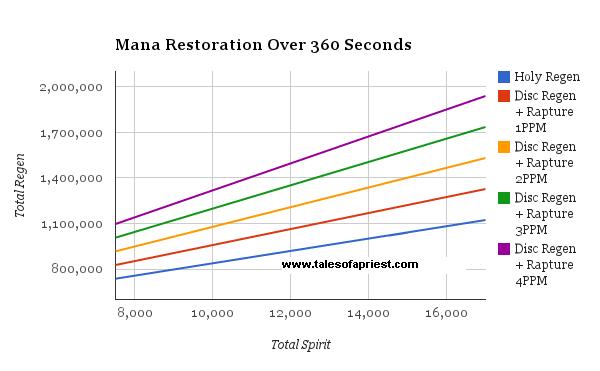 I am not sure what I am asking for in this post, but wanted to bring something to everyone’s attention— something that has been bothering me— bothering me from a mechanic perspective. Ultimately, I am asking for a nerf…. yes. I reluctantly state this, but that (I guess) is what I am asking for— well, maybe not a “nerf” but a change. As many of you know, I am not a fan of the Rapture mechanic. I have a number of reasons for it, not the least of which is the battle between multiple Discipline priests in a raid to fight over Weakened Soul debuffs, but perhaps the largest being the scalability and the disparity it creates between Holy and Discipline.

In early MoP Beta, Disc had a lower base regen than Holy did forcing Disc to rely on Rapture returns to get into parity with Holy in terms of regeneration. Then came changes, increasing our Meditation to 50% for both Holy and Discipline, making Rapture just added gravy. I had concerns, however, it really didn’t culminate until Rapture was buffed to 200% spirit.

Every time your Rapture procs, you gain 200% of your total spirit back as mana– on a 12 second CD. At the moment, this also includes Temporary Spirit Gains.  So this means any temporary spirit proc/boost, if active when Rapture procs, also contributes to your Rapture Regeneration. (eg. Mana Tide Totem, Tailoring enchants, DMC trinket, Tsulong trinket, low mana Jade Spirit proc). This is in addition to whatever baseline regen this spirit grants you through the normal regen calculation formula.

As of now, you only need 9,150 spirit to make a single PW:S case per Rapture CD mana neutral. With the plethora of spirit procs  you are often seeing Rapture returns in excess of 30k– now yes, some of these trinkets have ICDs longer than a standard Rapture CD, but still restores substantially more mana during that proc’s uptime. Many priests, myself included, are tracking our Spirit Procs and timing Rapture’s during that proc’s uptime.

Now, what does this mean for Holy’s regen? Well in comparison, it becomes inherently less. Perhaps this is part of the reason you are seeing so few people playing holy, and so few WOLs with Holy priests included… just due to mana.  (Though, a good deal of it is the inherent strength of Spirit Shell, but mana is also part of the case as well). It doesn’t make sense for Disc to have such a substantial advantage over Holy when it comes to regen.
Lets take a look at really what this means and evaluate a 6 minute fight and compare Holy Regen to Discipline Regen under several Rapture PPMs (Procs Per Minute).

Now, lets take a look at the same situation, however this time let’s add the assumption that the trinket Spirits of the Sun, procs twice during this model, and 2 Raptures happen during its 20 second uptime. We also include the additional regen that the proc’s increase spirit provides baseline. 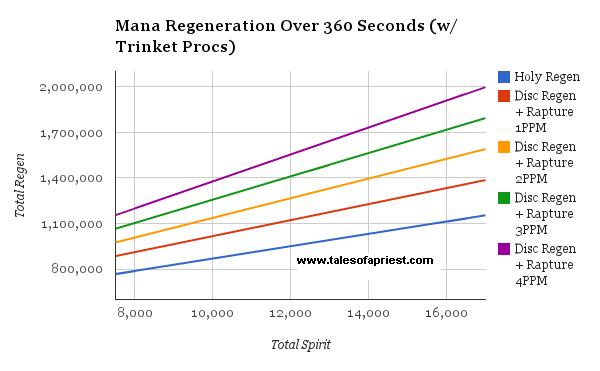 Of course, there are many other opportunities besides just this ONE spirit proc trinket. (Darkweave Embroidery, and the Darkmoon Card), which actually provides even further bonuses to Discipline when leveraged with Rapture.
Some priests are suggesting that to bring Holy’s regen back into parity we re-introduce crit based Holy Concentration. This makes me want to wretch a little bit– mostly because its quite similar to Shaman Resurgence. While, yes, bringing back that iteration of Holy Concentration would provide some more dynamic regeneration, as well as increased viability of Crit as a secondary stat, I am not sure it is the way to go. Another solution is to remove Rapture entirely. We cannot remove Rapture since part of why Rapture is in place is to insure balance against PW: S spam. Without Rapture (and its ICD) to throttle PW:S’s net cost, we would slowly start to see the return of PW:S spam… and that died with Arthas.
At the very least, temporary spirit boosts should NOT be a part of Rapture’s calculation— much like how it operates with Mana Tide Totem. Will we see this come down the road? If this continues, we’ll see more and more Disc priests and fewer and fewer Holy priests given the greater scaling that exists with Disc since you can ‘get away’ with less spirit, and more other secondary stats while maintaining the same Regen. (at only a 1 Rapture per minute comparison, you’re looking at ~3,000 spirit disparity; which could become 3,000 of any other secondary stat through reforging and regemming). Something will need to be done, otherwise we’ll only see this get worse before it gets better.
What are your thoughts? Is this disparity too much? Is it justified given the “active regen” role you can play as a Disc Priest timing and planning your Raptures?