by WOW Priest | Raiding, Talents, Wrath of the Lich King

Power Infusion can be a baffling spell to one who doesn’t understand it. Even to those who play priests, understanding how it works, when to use it, who to use it on & who NOT to use it on, is a daunting task. It becomes even more difficult for raid leaders who don’t play priests to make sure their raid is set up for it’s optimal usage. With so many new priests, priest alts, & new Raid leaders riding out the expansion, I think a Power Infusion Re-revisited is in order. 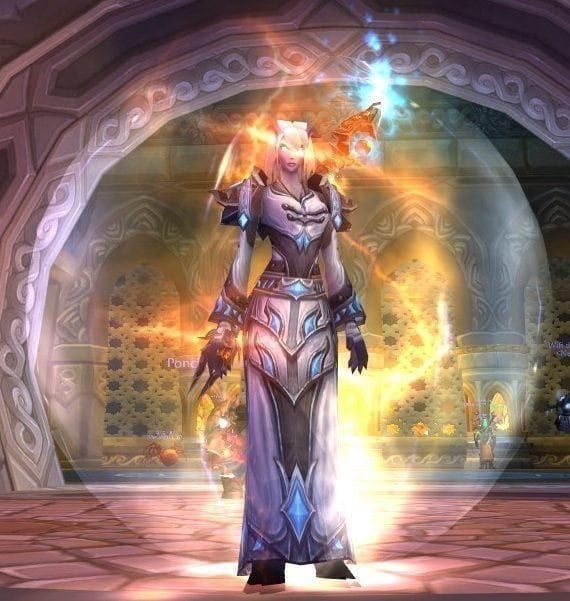 Some of the confusion comes from the fact the spell didn’t always work this way – it used to be a 20% direct damage boost. Now that’s pretty easy to understand, isn’t it? Everyone wants MOAR DAMAGEZ!!!111111ONEONE. But with the change, it’s no longer a pure spell damage boost – it’s now a haste boost., and who it benefits the most is no longer so cut and dry.

“WHHHAT? “ you say. “Don’t all casters want MOAR HASTE? God, you’re dumb, Ava.” Well, yes, I am dumb, but that’s besides the point. Most casters usually do not skirt the haste cap on all their spells, but that doesn’t mean that you should just randomly pick a caster to toss is on, nor does it mean you should toss it out when ever it’s up without thinking about it.

Power Infusion Does NOT Stack with Heroism

First, let’s get the most irritating thing out of the way: What PI does, and does not, stack with. A general rule of thumb is that you can only have one external activated haste ability at any time. Things such as Heroism/Bloodlust are considered External, and therefor DO NOT stack with PI. You can, of course, still cast PI during a Heroism/BL, but the only benefit received will be the mana reduction – quite the waste of a powerful spell.

While you can’t stack external haste buffs, you CAN have an infinite number of self only buffs. Things such as Trinket Procs, Potions of Speed, Troll Beserking – those will stack with PI.

Passive abilities, such as a Wrath of Air totem, Swift Retribution & Improved Moonkin Form will also stack with PI

PI also does not affect your GCD.

So Who do I put Power Infusion on?

In no particular order:

Warlocks: I just want to thank Bringing Chaos for his infinite patience with my warlock questions this expansion

Mages: All 3 spec mages are good choices, but just to clear up some confusion I’ve seen:

Elemental Shaman: While my first choice is usually a Warlock, Spriest, or Mage, Elemental Shamans are still a good choice. They love haste, & PI DOES stack with Elemental Mastery.

Boomkins: Again, not my first choice, but to maximize the gain, cast PI during an LUNAR eclipse, not Solar. Look for the blue moon. Someone once remarked “Once in a Blue Moon, give a boomkin PI” and the saying stuck.

Yourself and other healers: We rarely use PI on ourselves, but that doesn’t mean it’s not an option. The key to a great healer is being able to quickly choose tools and adapt. If you are in a hairy situation that requires intense direct healing, use it. If you fill more of a bubble spammer role, and you see your tank healers are struggling, give it to them – better to lose some DPS than wipe the raid. That being said, don’t use PI on yourself as a mana saving tool unless it’s a make or break situation – if mana is tight, ask for an innervate, pot, Hymn of Hope chain, Fiend, have a shaman in your group drop Mana Tide…the DPS gains outweighs the mana reduction, especially if you have other options. On a side note, if you give PI to a holy pally during Dreamwalker, he or she will probably hump your leg.

It’s a lot to think about, so the best way to maximize PI usage is COMMUNICATION AND AWARENESS! Set your raid frames up to track these buffs you need to watch for. If needed, have the casters macro in a notification /tell to you on certain spells so you know when ( and when not to) cast PI. Use a mod like Guardian Spirited to communicate to them what you’re casting, or make a simple macro yourself.

Plan your targets before the pull, and make sure you understand the fight (and therefor the best times to use PI), and what the positioning will be, especially relative to your chosen target. The last thing you want to do in a fight is take your attention away from your healing target(s) to go chasing down a PI target. Also keep in mind the range of PI when planning this – just because a target is in range of heals, doesn’t mean they’re in range of PI. Let your potential targets know what you plan to do so they can be aware of their positions as well.

A PI macro is a big help. You could do something as simple as setting a Focus Target and using:

However I find that rather limiting. As I said, a good raider is about reaction & adaptability. If your focus target is dead, DC’ed or out of range, it leaves you fumbling around to “click & pick” a new target – not something you want to be doing.  You need to quickly pick a target, keeping in mind these pointers. Sometimes, the best choice for PI isn’t the ideal one, due to the dynamic nature of a raid encounter. For this reason, I use this:

I embed mouseovers into most of my spells, as you see, so this allows me the flexibility to quickly mouse over  a target, check that it’s in range, and cast with a notification. I also run guardian Spirited, so the embedded tell is kinda redundant. I tell myself all the /tell spam makes sure they’re paying attention, but really it’s because I can’t pass up an opportunity to call someone an asshole.

Use it or Lose it.

The worst use of PI is to not use it at all. We’re a big fan of ForteXorcist and PowerAuras – both can notify you when PI is off cool down. As I mentioned, don’t spend time hunting and picking for your PI target either. If you planned to throw it on the mage, but he’s clear across the room, throw it on the elemental shaman right next to you – you’ll do more harm trying to chase him down for a potentially larger DPS gain than you would hitting who you can. Think Heroic Lich King – do you want to delay your shields and possibly risk blowing up a shadow trap to find someone? Probably not. Analyze what’s available and in range, and quickly pick.

I’m sure most of this is old news, but hopefully someone will still find this useful. Derevka has our Beta key and infinitely more time, so I’m left cleaning up the few remaining topics for Wrath. Obviously these mechanics can and will change in Cata so CAN I HAVE A BETA KEY PLEASE?