How to Disco with the Lich King

by WOW Priest | Icecrown, Wrath of the Lich King 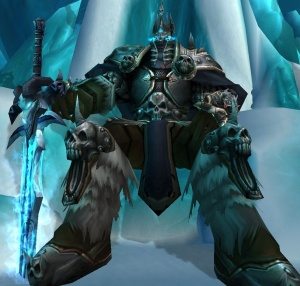 What? Disco is dead? Shit, I guess I didn’t get the memo. Thank god, because Disco music sucks.

But I’ll tell you what DOESN’T suck! Healing the Lich King fight as a discipline priest. If for some reason you still run with a group of window lickers that still don’t understand the benefits and abilities of a discipline priest, this fight alone should change their mind.

First of all, congratulations are in order: You made it to the Lich King. Now you have to kill him. He DOES have the purples, after all. When we did this, there werent many strats available, which is usually the case, so we usually adopt our own. How we do things may or may not work for you, depending on raid compesition, but the principles, and how to handle them from a healing perspective, remain.

(I’m also warning you now. I have NO CLUE how to use Photoshop,& I suck at MS Paint. Next time I’m just doing this in CAD.)

Our MT (the triangle) stands at the bottom of the stairs, tanking the LK, with all DPS focused on him. Our OT (The Star) stands to the right and tanks the Horrors. Melee stay clustered by the LK, with all Range and healers is a second group in the the position shown with a happy face. This allows for Range/healers & melee to DPS the LK while having a quick route to the Horror to have Necrotic Plague (NP) dispelled. Remember to move ASAP to this OT position, as it starts dealing a shit ton of damage. The cleansed NP will jump to the OT (cleanse it from the OT when the original target runs back) or Horrors. The LK will also be summoning Ghouls, which the MT should pick up. Don’t worry about them – AOE damage will take care of them too.

Here’s a Power Aura’s Code for the Necrotic Plague:

So what does a Disc priest do here? You make dealing with the Infest simple stupid, that’s what you do. Infest is a raid wide damage debuff that will appear in intervals throughout this fight (DXE/DBM/BW, ect should all have timers showing you when the next cast could occur). Notice how Infest works: The damage per tick continues to get larger and larger until the target is healed past 90% of their health….or dies. But if your target has a disc applied PW:S on them – *POOF* completely negated. The infest is absorbed the second it lands, and there’s nothing to heal (There’s also a strat in Heroic mode to click off Fort/Mark etc buffs, “healing” you past that level, but it’s not worth talking about for a normal mode kill).

If you’ve seen this fight a few times, you’ll know infest comes fairly soon after the fight starts. You should be running some raid warning mod(s) that have Timers & countdowns; After the dialogue starts, wait to about ten seconds before the actual fight starts- start spamming the raid with shields. Your gear should reflect this shield spamming role, making sure your PW:S GCD is at the 1 sec mark via haste, and have a higher amount of intellect for the constant spam.Watch your timers, spot heal, Rinse & Repeat. For our set up, we use two disc priests – one for tank healing & one for raid healing. As the tank healer, I focus on keeping the tanks healed, and shielded, as well as their respective group, leaving the other 4 groups for the raid disc. The tank healer can easily switch to raid spamming if the bubble spammer dies. You can choose to have 2 disc on the raid, but make sure you split your targets so you arn’t tripping over each others shields & Weakened Soul debuffs (sheilds & WS should be visable on your raid frames). It’s probably worth mentioning that Death Knights AMS works on this as well.

Also, make sure your raid frames are showing the amount of absorption left on your PW:S. With the increasing ICC buff, your shields may be able to absorb more than one infest (gear depending as well). Seeing this will allow you to skip some targets with sufficient shielding, saving time & mana.

At 70% phase 2 starts. The LK runs to the center, so move to & spread out at the position shown. The Shield Spamming can be draining on your mana, so this transition can be a good time to coordinate your Hymn of Hope with your other priests (this may not be needed at this point, with the ICC buff and most have considerable upgrades at this point- your mileage may very). Have a Ranged dps or two on the Spheres, have the tanks pick up Raging Spirits and the rest of the DPS take care of them. There is no defile in this phase, so spot heal as needed. This is a short phase, only lasting 60 seconds. At the end of that 60 seconds, run to the center of the platform as he begins to cast Quake, keeping away from any remaining spheres as the DPS finishes them off.

Note that it’s extremely fun to yell “GET THE SPHERES!” in your best Sean Connery voice.

Again, we might do things a tad different here. Infest will begin to cast again this phase, as well as Soul Reaper on the Tanks. Soul Reaper ROCKS the tanks, which will be swapping the LK, This is another benefit of the other Disc Priest on the tank by being able to mitigate a large portion of damage.

The raid should group up off center (towards the center of the platform) of where the tanks will be positioning the Lich King (Shown as the pretty heart). The Val’kyrs will approach from the shortest distance, so by positioning off center you will give yourself the largest amount of room to DPS them down. They will grab someone in the raid & make their way towards the edge of the platform.IF you don’t kill them before that, they drop their target off the side, and there is no way to rez them. They’re fairly slow, and you can’t snare them, but they can be slowed or stunned.

Now that’s only part of this phase. While this is going on, the Lich King also casts Defile – Big, Black Puddles of Bad you don’t want to be in. I can’t stress this enough: DON’T FUCKING STAND IN IT. You need to be watching your timers for when this is coming. When it’s coming, you need to spread out – FAST – as you have a mere two second cast time. After those two seconds, the Defile will drop where ever you are. It also will grow in proportion to the amount of people touching the drop area…if you’re not spread out, and it touches more than one person it can become too large to avoid. Three or more people usually results in this growing too fast to get out of, wiping the raid. Defile pools last about 30 seconds.

To handle this, we spread out in a fan direction towards the stair & portal sides of the room. Now, sometimes, the RNG gods will fart in your general direction, and defile and Val’kyrs will almost be on top of each other. WATCH YOUR TIMERS. Be prepared to run & spread out as soon as the Val’kyrs grab a target, or vice versa.

A disc priest has another advantage here in dealing with defile, as your shields can absorb the first tick or so of it, keeping it from spreading on the slowpokes.

This is another transition phase, occurring at 40%. It’s basically a repeat of Phase 2, so move back to the edge of the platform.  Raging Spirits seem to be a bit faster to spawn here, so make sure the tanks are prepared for that.

Move back in as he begins to cast quake. This phase is similar to phase Three, having Infest & Soul Reaper, but also adds Vile Spirits (there’s no more defile, however). Ranged dps has about 15 seconds after the first one appears to blast the crap out of them – after that, they make a bee line for you and explode. Make sure you are spread out when they charge so multiple people do not get hit by the AoE explosion. Seed of Corruption, grounding totems, Howling blast etc all work great here. Disc priests again offer a great buffer against this explosion for any stranglers that didn’t get burned down in time.

The Lich King will also cast Harvest Soul (Luckily he can’t cast this on someone targeted by Vile spirits anymore…that was usually a wipe). The person being harvested will be lifted up into the air, being strangled. HEAL THE HOLY HELL OUT OF THEM. Do not let them die. They will take a crap ton of damage, and if they die, the total amount of Harvest Soul Damage is transferred to the tank all at once. His ass will hurt for a week after that.

If the Harvest Soul target makes it thru the 6 seconds of pain, they are transferred in Frostmourne’s room. Inside, you will see Terenas Menethil fighting against The Spirit Warden. I found out the hard way, as a healer, you HEAL Menethil to full (yes, smiting the Spirit Warden doesn’t work too well). Make sure you dispell the Soul Rip (If you’re a druid, bash it if you can’t heal thru it). Again, DO NOT Let Menethil die, or the LK will enrage. This continues on until he’s at 10%…..

He’s had enough of playing with you. He kills you all, and begins to turn you into mindless Scourge. It’s GAME OVER, MAN. GAME OVER!

(Pro Tip: Don’t release.We found that out the hard way too.)

So That’s how we did it. It may or may not work for you, but hopefully it demonstrates the concepts & process well enough that you can adapt to something that WILL work for you. The hardest part of this fight is being aware, & being able to react. You master that, you’ll be collecting some new weapons in no time.

We usually don’t write fight specific guides, and tend to focus solely on the healing. This is one of those rare exceptions where we felt the fight needed explanation in order to assess what you will being healing through. If anything is unclear or you have any questions, feel free to comment, or hit me up on AIM or email/Gchat.