Well, Blizzard launched their official Mists of Pandaria Talent Calculator today… just in time for Thanksgiving. The question is: will we have anything to be thankful for? Cursory looks suggest that we might be in for an interesting change, based solely upon the spells we get for specific specs. I will say they put in a good amount of effort into breaking down the core spells and abilities for each of the two healing specs we have. That probably was a difficult task, as they want and need to be able to keep each of the trees viable in a PVE and PVP setting, while having enough core differences to make them feel unique. Unfortunately, there does seem to be a number of (accidental?) omissions in the first round of Talent Previews. (Or we can hope they are accidental!)

For those who haven’t made your way over to the official preview and calculator, as you level up you get certain spells and bonuses unlocked with specific paths and bones for both Holy and Disc (and Shadow too). 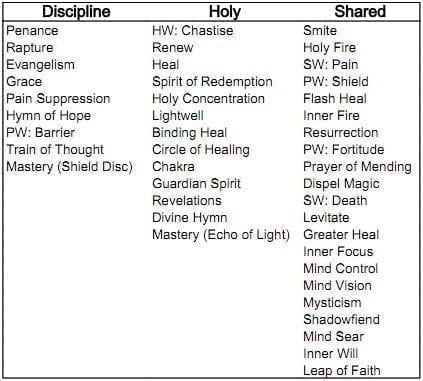 However, upon a closer inspection there are substantial gaps in the Specialization spells… and by gaps, I mean spells and key traits are completely missing. While, yes, Blizzard did they they were going to be pruning our spellbooks down; some of these missing tools seem to be clear oversights. Others, however might not be oversights and just will be changes into the way we play. Before we all go screaming that the sky is falling, lets remember to keep ourselves in check… this is just PREVIEW and is still under development. Therefore, by no means any of this is final. (and with some of the gaps, it obviously isnt final)

Talent Trees
There have been a number of bloggers out there who have commented on the talent trees and the choices we have at 15, 20, 45, 60, 75, and 90. While, I have been working on a post analyzing those choices… the talent system is less of a ‘choice’ than it ever was. With the ability to change our talents like Glyphs we will have the flexibility to customize our Tree to the boss encounter itself.  Further, we still don’t know exactly how a number of these abilities will work… and I really don’t like speculating.  I even hesitated to write this post as it is mired in speculation. There is simply TOO MUCH UNKNOWN and existing 4.0 talents could be merged into existing 5.0 ones. Until I can get my hands on concrete information about how these new abilities actually work in practice(eg. Void Shift), I think we are just speculating for speculations sake. Let’s see them in action before we make snap judgements.  Of course I DO have some preliminary opinions and gut reactions to a number of the new Talents… I just need to figure out how I want to communicate that on the blog.

Given the number of holes and unknowns, doing too much fretting over these trees is like tilting at windmills. The most we can do is keep our concerns in the back of our minds, and see what future Mists of Pandaria previews have in store. As of now there are too many obvious errors to really get too worked up. Is it possible that this is the final Priest Specialization/Talent Tree… sure; though it seems HIGHLY unlikely. So, calm down… pour yourself a glass of wine and relax; more information will be coming…. soon™.