Read that again… Critical Effect, not Critical Damage. This means heals are included in the 3% increased critical effect. Prior to this change, the only meta that had a +critical heal bonus was the Revitalizing Shadowspirit Diamond. (Which, for the most part, was dismissed as not worth it due to the increased value of Intellect over Spirit on the diamond as a basic stat– for both Holy and Disc)

Now, before you go swapping out your meta gems… evaluate the change. What does this mean for you? Well, obviously, the evaluation is going to be purely debating throughput vs regen.

On one hand you have the Ember Shadowspirit Diamond, this provides provides an increased mana pool, which in turn affects “total mana” based regen. (Replenishment, Rapture, Hymn of Hope, Shadowfiend, etc…) Additionally, you start the fight with more mana, which is mana you wouldn’t have had without the meta gem.

On the other hand you have the Burning Shadowspirit Diamond which provides you with 3% increased critical effects… pure throughput increases to your critical heals. (Disc Priests: Dont forget that this, in turn, provides increased Divine Aegis). Now the amount of the HPS increase from the meta gem is a bit tricky to evaluate, given innately different crit chances for Disc and Holy and different stat weights based on role. So for now, I’m evaluating it from a more practical sense.

I would also be remiss not to at least awknowledge the activation difference between these 2 gems. Burning requires 3 red gems, while Ember requires 2 yellow. Of course, this is a bit easier (and arguable irrelevant) given the sheer number of gem sockets on T13 gear. However, it still is something to potentially consider given the gear options you have at your disposal and how heavy you might value Intellect over Haste or Mastery (Orange gems).

The question is:  what is the give up? Let’s take a look at what the loss of mp5 of dropping the Ember for the Burning Shadowspirit Diamond. Of course, the loss of mana will be different person to person based on +% mana buffs. (Arcane Intellect, Expansive Mind,  etc…) For simplicity’s sake, lets evaluate this only assuming Rapture, 5 Min CD Shadowfiend, and Replenishment. 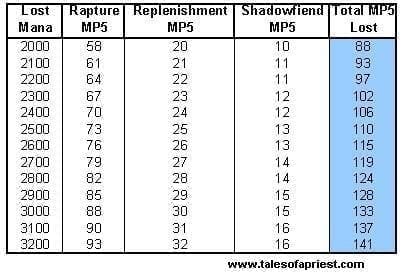 Holy Priests would obviously ignore Rapture, making the net loss substantially less as a bulk of their mana restoration is Spirit based (Holy Concentration). Of course you could layer in Veiled Shadows, Arcane Torrent, Hymn of Hope, or even an imperfect 12 second Rapture timing… but it complicates the basic illustration being made.

We then would need to compare the loss of MP5 to the gain– is the tradeoff worth it? For simplicity’s sake, I’d rather not dive into the specific math and numbers of crit chance and its relative HPS. I’d rather evaluate this in theory and more of a practical approach:  If you are currently having mana issues, starting with the extra 2% mana and having a higher MP5 suggests that the Ember might work better for you. If you arent, you could squeeze out some additional throughput by swapping to the Burning Shadowspirit. Bigger is better! Right? … right? Maybe…

There is no “right” answer. It really depends on your playstyle and preference. Perhaps you’d rather the added cushion of the regen, or perhaps you’d rather the raw throughput increases from the critical effect. The ball is in your court. However, take a good hard look at the actual regen you are giving up by switching… think at how little that is; how little spirit that “lost mp5″ represents. Particularly if you reforged away from spirit on any gear– could you get some of that spirit back through other methods? I bet you that the HPS increase, regardless of you value crit in your spec, is going to outweigh such a small amount of regen.

Me? I’ve swapped to the Burning Shadowspirit and enjoy the increased crits. What’s your plan?